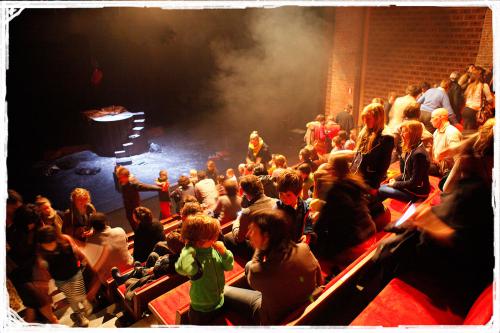 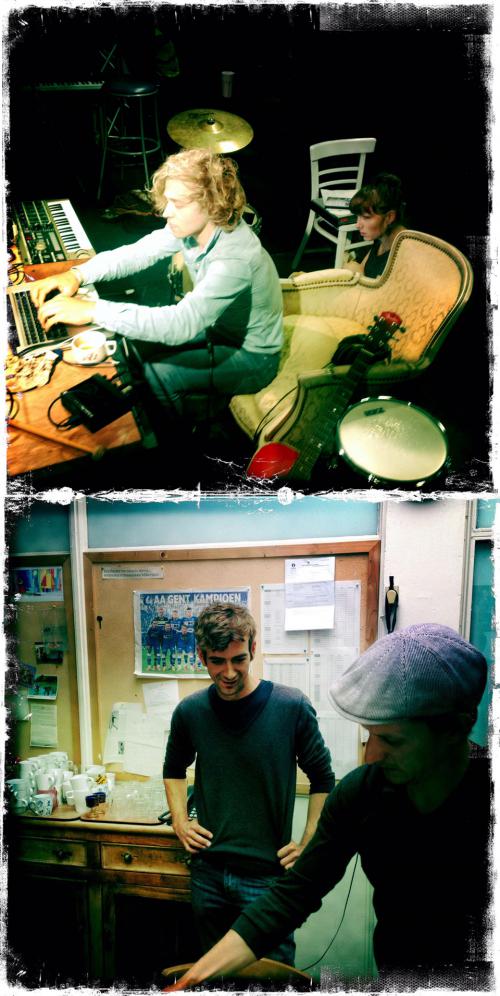 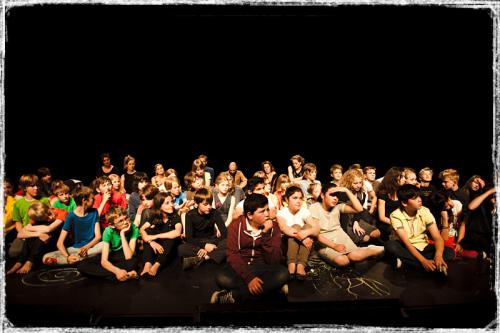 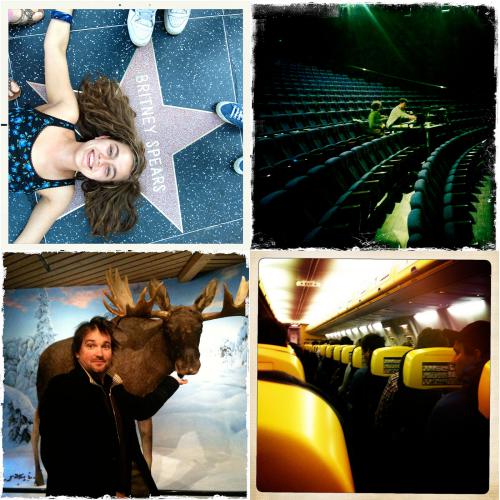 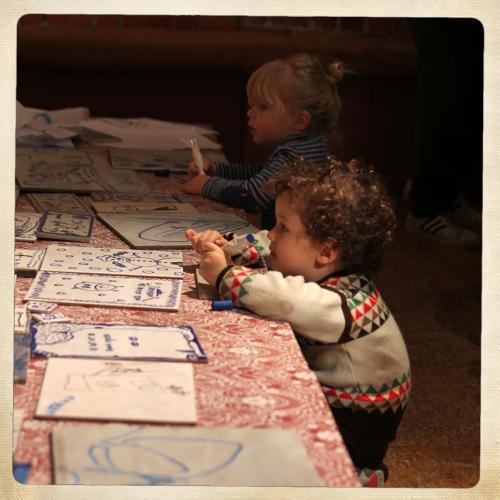 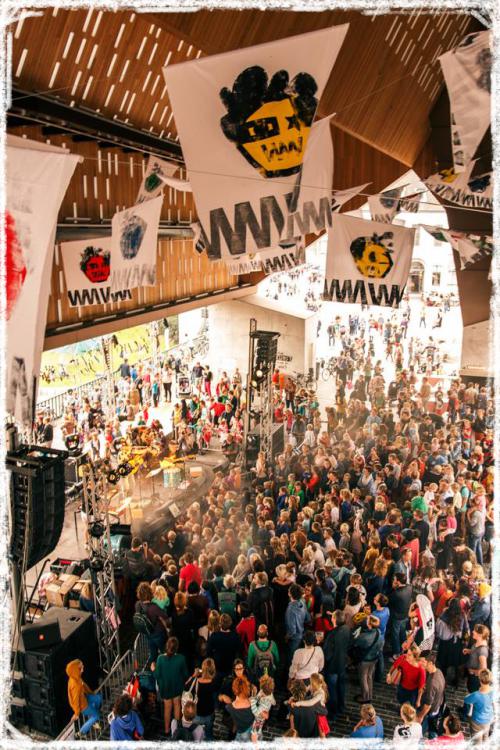 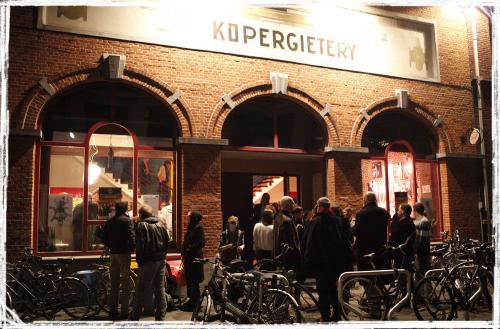 KOPERGIETERY is a creative venue for young people,
focusing on drama, dance and music.

A house where children and young adults are confronted with art.
A house where artists and children create together and inspire one another.
A house that puts on performances, invites guest performers and organizes drama workshops.

In 1978 Speelteater Gent (the first dramatic arts centre for children and young adults in Belgium) is founded in Ghent by Eva Bal. She puts on shows with professional actors and children/young adults and runs a first series of workshops.
In 1980 the company receives its first government subsidies.
In 1993 the company pairs up with a private partner and finds its very own home in an old copper foundry.  This marks the start of activity pillar number three: that of hosting guest performances.
In  2001 Speelteater Gent/de Kopergietery changes names and becomes KOPERGIETERY.
In  2004 Eva Bal passes the artistic-director baton to Johan De Smet.
In  2009 KG RABOT, a second creative/performance platform, opens its doors in the multicultural Rabot neighbourhood.

Artistic director Johan De Smet and the entire team resolutely chose to follow the line of interaction between continuity and innovation. Idiosyncratic makers of all ages create and present productions, which results in a special artistic dynamics. The quest for authenticity and a true affinity with/interest in children and young adult is the glue that holds this mix of makers together.

Children are viewed as the source, the driving force, the ground beneath all artistry. Children are taken/accepted as they are but also for what they can be. Children are urged into becoming creative, tolerant human beings who learn how to think for themselves through art.

KOPERGIETERY’s overall approach has made it into a creative, ‘touring’ house that is profoundly embedded in its own city, continuously invests in new makers and has an extensive international network.

Each season KOPERGIETERY creates 3 to 5 new performances for various ages with a cast of professional actors and/or dancers; often also with children and young adults from its own Drama workshops.
KOPERGIETERY’s creations are truly genuine. Its makers hardly ever start from existing text material; they draw from their own experience, look for their own words, own images, own vernacular.  KOPERGIETERY also invests in young makers,  who are given a platform to create their first performance. They often set up their own theatre structures or join existing ones after that. KOPERGIETERY also regularly embarks on co-productions with (inter)national companies and creative houses such as  Studio Orka, kabinet k, Staatstheater Oldenburg, Vélo Theatre or New International Encounter (NIE).

KOPERGIETERY’s creations tour all over Flanders and abroad.
KOPERGIETERY strongly believes in the importance of international collaboration and forms an integral part of an extensive network of festivals and cultural centres.

Every year KOPERGIETERY invites several guest companies to its Ghent platforms. A vast array of art forms offer a selection of challenging, contemporary creations by experienced  makers as well as new-comers. KOPERGIETERY regularly picks out one international company or maker with whom it feels a particular artistic affinity; the so-called ’residencies’.

The workshops are the heart and soul of  KOPERGIETERY.  Each season about 150 children between the ages of 8 and 18 meet up with a professional coach/artist on a weekly basis. It is a process of mutual inspiration, of perfecting skills and individual talents but also of acquiring insights. Insights into what drama and theatre can be. Insights into what happens in the world.
The approach and ways of artistic expression, the group set-up and team of coaches change regularly, which greatly boosts the internal dynamics. The workshops try to yield at least one tangible project per season. Artistically successful projects coming out of those workshops often grow into fully-fledged shows, such as Pubers Bestaan Niet (Once and for all we're gonna tell you who we are So shut up and listen), Rennen (Run) and Shelter.

In 2009 KOPERGIETERY spread its artistic wings to the Gent Rabot working-class area. It now has a second theatre platform in one of the city’s poorest areas, with a high concentration of different nationalities.
KOPERGIETERY develops specific artistic projects to appeal to its inhabitants. This mainly happens through collaboration with local organizations and/or (local) artists. KOPERGIETERY joined forces with the local Mandala Freinet school, for example. This  yielded a number of drama projects but also the literary project Soepletters (Soup Letters), in which every primary-school class took part. The final result was a Dutch book, custom-made for the – often non-native – children. In addition to the artistic projects, weekly drama workshops are also organized for children from the neighborhood. The aim is to make them familiar with theatre, and – when the time is right - to move the ones who want to the ‘regular’ drama workshops. In June 2012 the area opened its own local restaurant  (eetcafé Toreke), where KOPERGIETERY also programmes cultural activities, alongside regular shows in KG RABOT.

Each season KOPERGIETERY takes its own productions as well as guest performances to vast school audiences: more than 270 schools, i.e. some 11,000 children and young adults. What is made and shown relies on maximum participation of the schools’ children and teachers. To help performances run smoothly, KOPERGIETERY fully supports schools and provides ample background information.  KOPERGIETERY also sets up various educational projects that meet teachers’ (and future teachers’) need to acquire a deeper insight into the performing arts – insight which they themselves pass on to their pupils.